Chair Man is a live edit of video footage shot by Paulien Oltheten in Nicaragua. It shows her repeatedly following a man who carries a plastic chair on his head while riding a bicycle to and from work. Fascinated by this phenomenon – his balancing act – Oltheten continues to film him. Her presence begins to exert an influence on his daily routine, prompting slight changes in the pattern as the man becomes aware of the camera and the documentation of his actions. While searching and clicking through the rough video edits, Oltheten sometimes shares anecdotes, while other times leaving the image alone to speak for itself. These manipulations create an associative narrative that allows her to emphasize particular scenes, events and qualities on the spot. By alternating the documentation of spontaneous moments with acts of intervention or alteration, Chair Man becomes Oltheten’s own balancing act between the real and the staged. 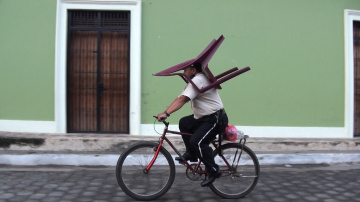 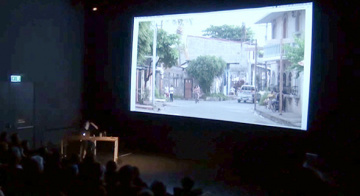 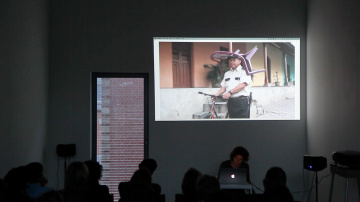 Fragment of performance at KASK, Gent, 2014