about
calendar
press
publications
shop
<
PRESS:
>
The time in the work of of Paulien Oltheten

One of the most famous statements in the history of photography was introduced by Henri Cartier-Bresson in 1953 as the ‘decisive moment’: the magical moment when eye and finger are one, the shutter is released and a moment in time is frozen. Cartier-Bresson’s pronouncement has influenced generations of photographers and has been referred to in texts about photography on countless occasions, but its ultimate validity can also be called into question. The work of the young Dutch artist Paulien Oltheten (b. Nijmegen, 1982) demonstrates that the decisive moment is not necessarily limited to a specific instant.

Public space and the street in particular are Oltheten’s pre-eminent workplace, humankind and human behaviour her subject. She literally mingles with the masses with photo or film camera in hand and beholds what is happening around her. She documents, makes observations, findings and discoveries. She subsequently elaborates these documents, annotating them with drawings and comments. Oltheten concentrates on the small details rather than on the big events: a movement, a conversation between two people, a posture. The first documents to be gathered on the street were presented in The first thing I saw (self-published, 2006) and Theory of the Street (NAi Publishers, 2007).

The images accompanied by her personal commentary are studies to better understand situations and behaviour. For the viewer they are also a means of gaining insight into how Oltheten works, looks and thinks. For her the decisive moment has often passed before she takes a photo or shot. Her decisive moment first takes place in her mind, emanating from a process in which she has already formed an idea about an image’s form and content. What we see in the photo (or on film) are often the end products of something she noticed earlier. She then searches for a specific circumstance that best dovetails with this. The process can also work the other way round. She photographs something on the street and only later does she start to work with that image. The images are often so apposite, astonishing, poignant or filled with humour that it seems as if fortune is smiling down on her. You almost wonder who is exercising control over the scenario: is it the chance passer-by or the person behind the lens? It seems paradoxical to state that Oltheten, who relies so heavily on chance, is a true director. Nevertheless, that is often how it feels.

If she is not sufficiently convinced by her ‘found’ images, back in the privacy of her studio or home environment she subjects herself to forms of self-analysis which she subsequently documents. She meticulously imitates situations she has seen or recorded, she compares or takes measurements. She subjects the outcomes to further analysis. Is it really the case that the comb which is stuck into the back pocket of a pair of trousers protrudes so far? In various postures she tests how a comb in her own back pocket reacts to her movements. These semi-scientific studies are reminiscent of performances by artists in the 1960s and ’70s.

One of Oltheten’s wishes is to make an extended film in which her amassed photos and films fall into place like the little pieces of a puzzle. Recently, during a sojourn in Japan, she made a new step in that direction. Instead of being an observer behind the camera and an analyst afterwards, Paulien Oltheten has explicitly become an actor in her own work. She is evidently an actively guiding factor in her scenes. Often she herself appears in the frame while she is talking to people and we see how she assumes control of situations.

An example. The camera rolls. A Japanese couple is walking up a hill. She walks to the right of the footpath and he walks to the left of her, but backwards. We hear Oltheten’s voice: “Excuse me, could you please do that again? It’s so beautiful.” The couple walk towards her in astonishment, and when they ask if they have understood her question correctly they return to the place where they had just been walking. They concentrate briefly and then they do their best to resume the uphill walk from the same spot and with the same nonchalance. She walks forwards, he walks backwards. When they arrive at the top Oltheten is still not satisfied. She asks whether they can do it again, just like the first time, please. They agree to do it again, but this time it has to be spot on. Encouraging each other they go through the same exercise. What we see is a remarkable apperception: the seemingly simple request to repeat something proves to be an impossible task. Instead of seeing a more practised repetition of the same thing, the movements become increasingly artificial and are at the same time further removed from the natural behaviour that Oltheten originally captured on film. The result is absurdist and exceptionally amusing.

Oltheten’s work raises questions about how we behave and why. Yet her work is also a confrontation with time, with the ultimate moment, and provides proof of our inability to control or bend this to our will. Her work is a social tableau of what we do and who we are, in which the acceptance of chance and the moments of doubt and uncertainty constitute important aspects. She teaches us to look by revealing how she works towards her decisive moment. Often it is right then that the most wondrous things happen. 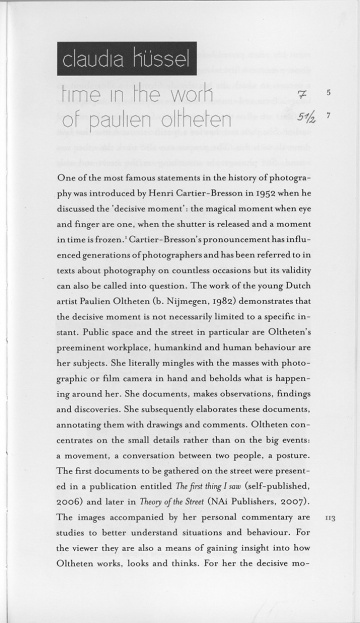 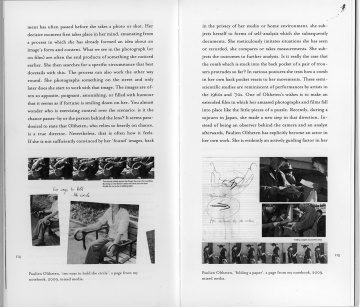 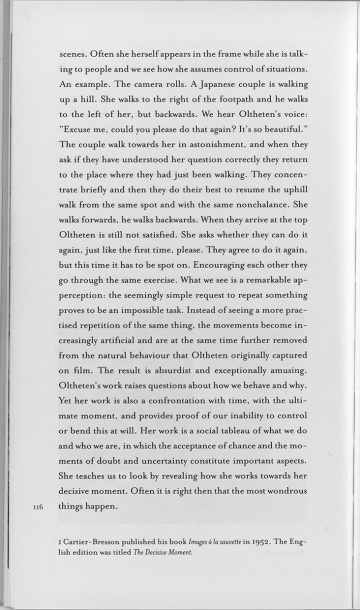 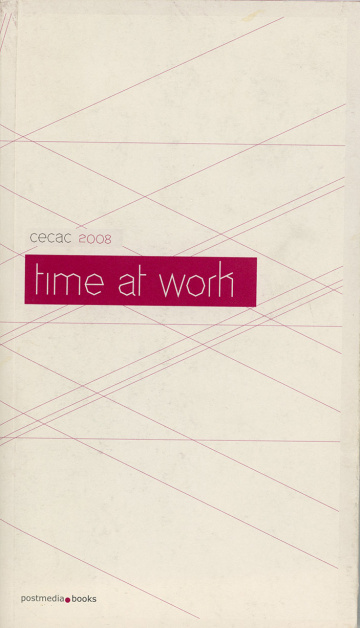