In her first solo show at Galerie Les Filles du Calvaire, Dutch artist Paulien Oltheten guides us through locations she has explored during the past few years: from Iran to Russia, but also the Paris districts “les Olympiades” and “La Défense”. Two years after Rencontre d’Arles, where she won the “Prix découverte”, the Gallery is glad to show an extensive range of her works.

Our life space is neither continuous nor infinite nor homogeneous nor isotropic. But who knows where it breaks, where it bends, where it falls apart, where it gathers? (Georges Perec)

Following Perec, Paulien Oltheten wants to question space. She reads space according to those who cross it and act in it: mental spaces as well as physical ones interconnect in a form of poetic complicity. Oltheten finds her material in the everyday behavior of people and things, patiently revealing its essence. Tirelessly she keeps following people and locations, sometimes entering into real but brief relations with them. With humor and imagination she rebuilds improbable links between human beings, their businesses and their movements.

Her work echoes the urban theories of American sociologist Richard Sennett, who states that the configuration of a city’s space exerts a major influence, positive or negative, on the life of its inhabitants. Paulien Oltheten highlights our repetitive behaviors in the interaction with urban structures, for example La Defense: «The esplanade is massive and does not invite you to stay in its center, you have to cross it, take refuge on the sides. It’s like a loop of repeated actions. There are small differences, but the great mechanics remain the same.»

At the Gallery, Oltheten chose to show emblematic works in the form of photo installations, performances and videos. In “La Défense, le regard qui s’essaye” she confronts the graphic project of architects with the repetitive behaviors of the people who navigate this space, and the occasionally weird presence of objects in it. Starting from scratch, she constructs encounters between a scientific book, a family photo album and an ex-teacher’s attaché case, blending fakeness/illusion with reality/coincidence. The result is a workshop on anthropological observation, with the artist, in the role of performer, as its subject.

In “NON” she starts from a mural graffiti found in the “les Olympiades” district of Paris; in front of it, she captures the people passing by while they react to its explicit message as a social or a political statement. Her split-screen film “To those that will, ways are not wanting” presents observations of perseverance in two parallel worlds. Oltheten recorded scenes of people who are maneuvering through obstacles in Iran and Russia or how they cross the rivers that are transformed into new public spaces: the frozen Volga river becomes an infrastructure, and a dried-up riverbed in Isfahan a peaceful urban transition zone.

Art supersedes the documentary aspect in Paulien Oltheten’s work through a delicate vision of daily life. A unique choreography arises in a series of photos taken from her private notebooks, where she punctuates her recordings with quick sketches and phrases.

This show offers a clear understanding of our day-to-day relations with the surrounding materiality, and our repetitive ways of dealing with our environments. These fragments open up a zone between absurdity and contingency, a space of freedom through the infinite possibilities of never-ending stories. 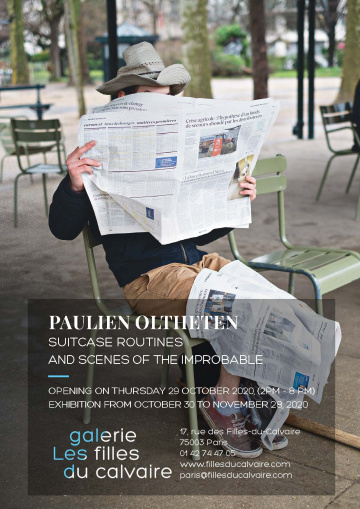