Exhibition
So, what you need for a crisis:

1. A substantial threat.
2. Element of surprise.
3. Quick decision time.
4. The will to change. Otherwise, it is just another fatal incident.

We believe that we can define a crisis, that it is a whole that can be broken down into piecemeal parts. Perhaps we are overlooking one or more points.
5. The failure of a dream.

Some people say that — for those who understand the difference — there is more desire for pain than for love. When things go too well for a nation, I read in a book about climate change, people commit suicide en masse. And even after that, a person wants to defuse the crisis. I know someone who committed suicide. Her bicycle was parked neatly along the railway line. In the bicycle bag was a note that said: no red memorial card.
6. And then wake up.

In the group exhibition Never Let a Good Crisis Go to Waste, four artists show how they turn a crisis into their work. The exhibition arose from a personal and universal crisis of the director who was forced to cancel a planned exhibition. Meanwhile, she was dealing with a leaking roof, a heat wave and a heart that could not be tamed. She herself would later declare that it did not matter. After all, art exceeds the individual. But then what use is the group to us?

Let's keep it this way. A crisis also exists because:
7. Everything matters.

And finally:
8. We must not forget the vicious circle.
9. We forget anyway.

Thanks to
This exhibition is made possible by the Municipality of Amsterdam, Mondrian Fund and AFK. 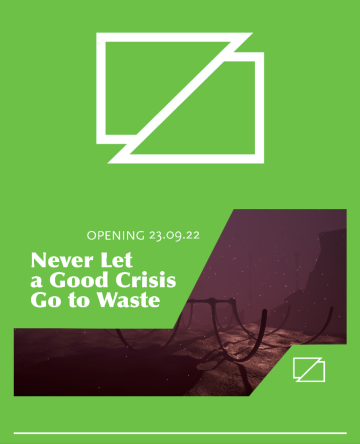